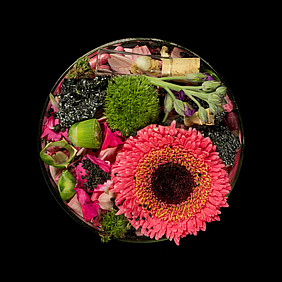 “Is it possible to be a revolutionary and like flowers?” asks the artist Camille Henrot in one of her recent artworks. Continuing in that vein of wonder about the revolutionary power of plants, Taryn Simon has applied floral bouquets as a form of institutional critique. Both artists’ works are examples of the political and cultural implications of plants. They are signifiers for the recurring representation of plants in contemporary arts and culture.

The symbolic meaning of plants, their relevance for religion and the metaphorical provocations in the order of knowledge, culture and political power underline the role of plants as something more than passive objects. The symbolic meaning of plants changes over time, according to cultural developments. In the origins of Western thought in particular, nature has been represented as both the embodiment of good and the epitome of evil. In Ovid’s telling of humanity’s golden age, the earth is an abundant source of nourishment and pleasure, while in Christianity, a snake tempts Eve into eating a forbidden apple which precipitates the fall of mankind from the Garden of Eden.

Such signification of plants and nature became intensified during the Industrial Revolution. In general, religious implications were discarded to favor images of plants and animals as savage entities. For example, the jungle in Joseph Conrad’s Heart of Darkness becomes a character of its own that expresses dark and fierce forces in opposition to the concepts of light and order in European sensibilities. Human nature was characterized as a civilizing force while fauna and flora were seen as the wild and degenerative.

In the current climate, plants are undergoing radical changes due to environmental alterations and laboratory practices. From genetic selections to indoor farming, from foodstuffs and medicinal uses, plants are being re-evaluated as living entities. As sentient creatures they protect their own and engage in masquerading their identities. It has been noted that they are more like animals, only slower. They are sources of nourishment and wonder while at the same time contain healing powers and even psychoactive properties.